It rarely crosses our mind that stomachache can occur as a result of a severe condition. This is the case since usually eating or drinking something or releasing gas eliminates the pain, however it isn’t always that easy. There are a lot of dangerous things that could be the cause of stomachache we should take into serious account-such as ovarian cyst. This story might help you recognize it and learn more about it.

A couple of days ago, Kiki Wei Kie, a woman from Hong Kong, decided to share her scary experience about suffering from abdominal pain which she experienced a few times in the past year. On April 17, she felt the exact same stomachache accompanied by a fever and discovered it was in fact due to a more severe condition – an ovarian cyst that was developing inside of her.

The reason I post this – to warn all the ladies to do full body checkup every year.

(Warning: Some pictures are gross, view them at your own risk.)

Last Monday, I had fever and stomachache – sometimes the stomach pain is sharp, sometimes it’s dull and it comes and goes. This happened few times since a few years ago, every time the doctor (of the clinic) would tell me that I have a bloated stomach and gave me charcoal tablets to ease the pain and gas. Everytime when I experience the same pain, I knew what is the doctor going to tell me and sometimes I don’t bother to see a doctor.

But this time the stomach pain is unbearable and my fever comes and goes, so I asked to go the hospital.

After all the checking, the doctor said it is not dengue, so it might be appendicitis. So next day – operation day. After few hours of operation, they sent me back to my room and by the time I was awaked, the doctors came with two bottles with ‘something’ inside.

One of the doctors said “So we removed Wei Kie’s appendix and also we found a cyst during the operation, and one of the ovaries is damaged and had been removed” (WHATTT?)

About my ovarian cyst – it was around 20cm large (with 400ml of liquid/water/blood?) hence doctor had to cut 20cm in my belly to take it out. And yeah, the appendix is not longer the main point. 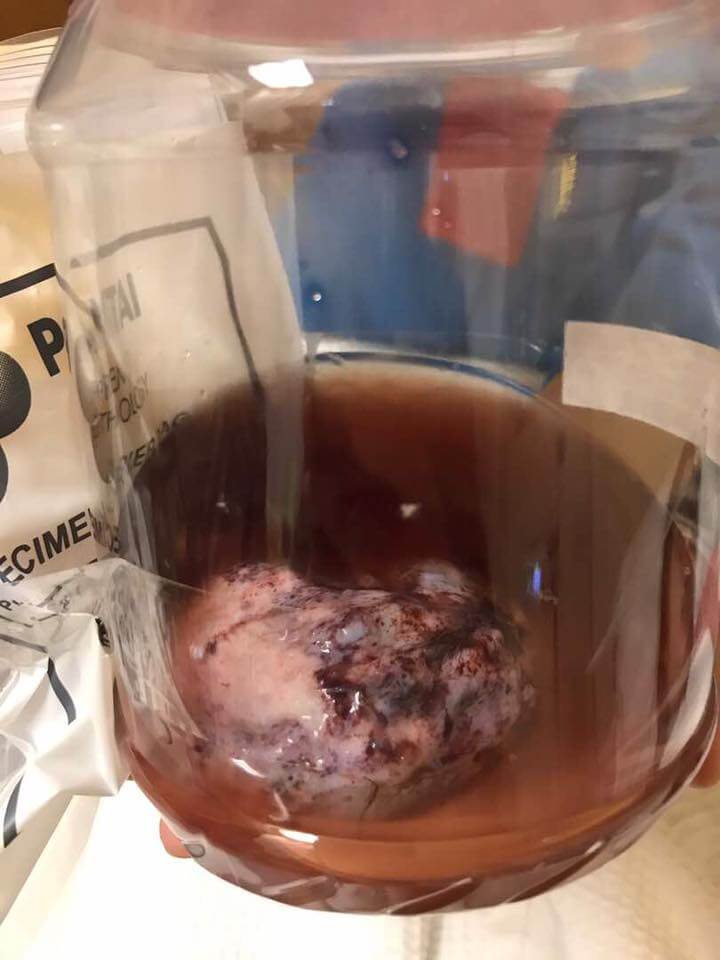 Yes, this is depressing but I am very lucky because I still have another ovary with me now. The doctor managed to clean the other ovary and removed the cyst as it was not as large as the 20cm one.

What causes ovarian cyst? (pardon me copied from google)

During a woman’s menstrual cycle, an egg grows in a sac called a follicle. This sac is located inside the ovaries. In most cases, this follicle or sac breaks open and releases an egg. But if the follicle doesn’t break open, the fluid inside the follicle can form a cyst on the ovary.

How to find out if you have an ovarian cyst?

Do body checkup! (This is what I have been telling all my friends when I saw them.)

This might not be something nice to share around (my ovary T_T) but I hope every lady is aware of this and take action before it causes serious problems. #OvarianHealthAction

Do you know someone who had an ovarian cyst removed from her body? Do you know of any other ways to prevent and treat this type of cyst? Share your ideas with us in the comments section below!

tpn.ph facebook.com
2017-08-19
admin
Share
Previous Netizen’s Story About Her Condition
Next 12 Life-Saving Ways For A Post Party Clean Up
This site is designed for educational purposes only and does not render medical advice or professional services. It is not a substitute for professional care. If you have or suspect you may have a health problem, you should consult your health care provider.
© Copyright 2022, All Rights Reserved