What Causes And How To Treat Snoring

All of us recognize what exactly snoring is – it is the snorting noise, among other sounds, that folks make when asleep. And despite the fact that it might not be very obvious, even more than 40% of men and women snore while sleeping. Snoring can be said to be very uncontrolled among the existing population.

But as not everybody snores while sleeping, other than from time to time maybe during very deep sleep, it’s clear that regular snoring is not a great thing.

So, the obvious question that arises next is why people snore in the first place, and how it can be curbed, if not cured. And that’s what we aim to serve through this article. So if you are a regular snorer, or know someone who snores and maybe disturbs your otherwise peaceful night sleep, you’ll find this article quite useful.

Almost half of the population is affected!

All of us have snored at some point in time or the other, during occasionally deep sleep, but some people snore on a regular basis, which is not healthy.

Read also: Here’s How Much Sleep You Need According to Your Age. Reasons 6 Is Very Important!

Snoring also disturbs other people sleeping near you.

This clearly becomes an inpediment to sleeping together!

So here’s the obvious question that arises…

What causes snoring and how can it be curbed?

Here’s the nerdy version of the cause of snoring… 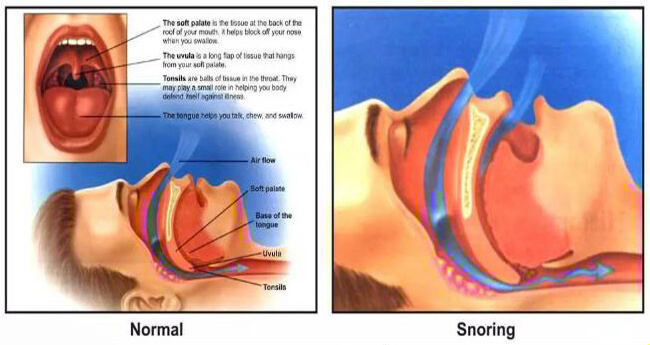 Snoring is caused by the vibration of the soft palate, which should normally not obstruct the canal meant for breathing. So basically, anything that relaxes the muscle can be deemed as the reason for snoring.

What are the things that can cause relaxation of the muscle?

Alcohol and highly sedative medicines such as sleeping pills and cold medication are some of the biggest contributors to relaxed muscles.

There can be some other reasons as well…

Being overweight, or sleeping on overly comfortable bedding can also induce snoring.

So, how can we curb snoring?

Start with exercise. Exercising helps the body in more ways than most of us know. A fit body is a good start to curbing any anomaly in the body.

However, you should avoid drinking within 3 hours of bedtime.

Bring your sleeping posture into check…

Try sleeping on your side rather than your back, so that the soft palate doesn’t sag and block the air canal. Also, use optimum bedding for just the right amount of sleep.

Read also: These 4 Plants For Your Bedroom Will Cure Insomnia and Sleep Apnea

2017-04-29
admin
Share
Previous How To Use Onion Peels
Next Homemade Solution For Toothache
This site is designed for educational purposes only and does not render medical advice or professional services. It is not a substitute for professional care. If you have or suspect you may have a health problem, you should consult your health care provider.
© Copyright 2022, All Rights Reserved