A Common Female Habit Can Make You Lose Your Leg

A brave mother issues warnings by sharing her story about how she almost lost her legs due to a life-threatening infection that appeared as a result of shaving her pubic area (CAUTION: graphic images below).

Dana Sedgewick was unfortunate enough to get the infection after shaving her groin with a brand new razor and by a small cut in that sensitive area. Almost right away, a red rash broke out all over her legs that rapidly transformed into a flesh-eating infection known as necrotizing fasciitis.

Sedgewick was rushed to the hospital where doctors removed rotting skin – but she developed sepsis during the procedure and was placed in a coma. Her family was informed that she had just a 30 percent chance of living.

Sedgewick survived, though only after kidney failure and four instances of her heart stopping.

“Like a lot of women, I tried to keep a tidy bikini line. So I had a quick trim with a new razor,” she told Daily Mail. “But over the weekend, I felt unwell and noticed a little pimple on my groin which kept bleeding. I didn’t think anything of it as I often got a rash from shaving. Little did I know that this tiny pimple would almost cost me my life.”

The first time Sedgewick saw her legs, she was in total shock.

“It was horrific. All of my muscle had rotted away, and I had a crater of skin near my groin. I felt like I was going to throw up,” she said. “But I knew that it could have been much, much worse. I could easily have lost my legs – or worse, died.”

After six weeks of recovery, she was discharged from the hospital – and the next four years proved intense as she recovered and underwent 21 surgeries to improve the appearance of the skin on her legs. Her husband, Matthew, was by her side the whole time.

“It didn’t feel like my own body any more,” she said. “But with Mat’s support, I grew to see the scars as a reminder of how brave I’d been, and how lucky I was to survive. It’s incredible to think a tiny shaving spot could have killed me. I had a very close shave indeed.”

Many readers expressed their sympathy towards the woman for the ordeal she was put through. 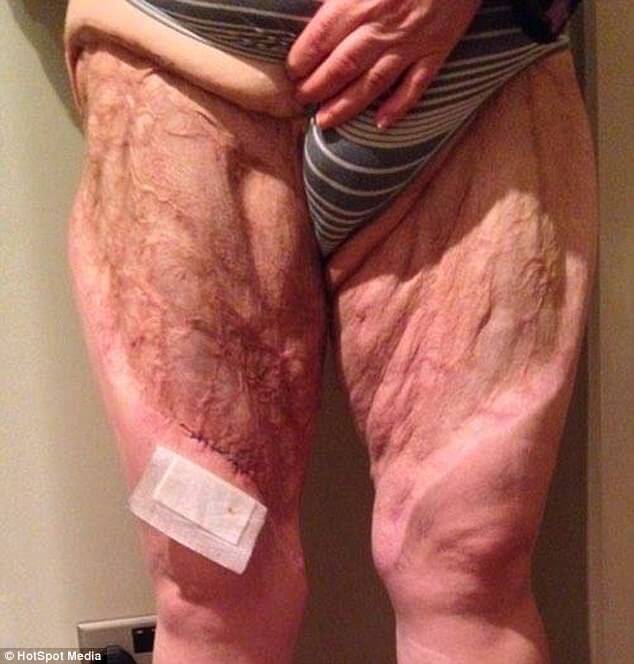 “Necrotizing Fascitis is nothing 2 joke about!!!! Lucky she kept her legs and her life!!!!!!” one Mad World News reader commented on the site’s Facebook page.

“God bless you hope you are feeling better,” another added.

2017-08-25
admin
Share
Previous She Woke Up With A Chunk Of Skin Missing. To The Right, Stood The Culprit
Next The Dentist Was Startled Upon Seeing This Inside His Mouth
This site is designed for educational purposes only and does not render medical advice or professional services. It is not a substitute for professional care. If you have or suspect you may have a health problem, you should consult your health care provider.
© Copyright 2022, All Rights Reserved