The Best And Worst Slice Of Toast! What Is The Healthiest Shade

The entire internet community got worked up over the latest viral picture that has dumbfounded everyone on the issue of the perfectly toasted bread. The photo of 16 slices of breads toasted to a different degree got published on Facebook a week ago and has revealed the diverse tastes of people from all cultures.
The caption of the picture was: We’re having a little argument over here. Which number bread is toasted perfectly The post has garnered more than 300,000 likes and comments and still counting, with e comment or like differing from the other. 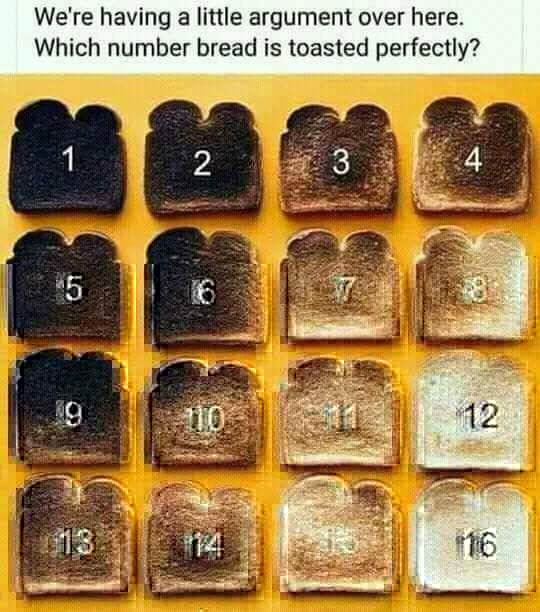 Experts say bread, chips and potatoes should be cooked to a golden yellow colour, rather than brown, to reduce our intake of a chemical which could cause cancer.

It’s long been known that just over-heating, let alone burning, some foods can lead to the formation of compounds linked to cancer – but what about toast?

In the case of burnt toast, most concern surrounds the risk from the formation of acrylamide, a compound that has been linked to cancer and nerve damage in animals. That said, the evidence of a direct link between cancer and acrylamide in food consumed by humans is far from compelling. While some studies have pointed to a doubling in risk of ovarian and uterine cancer among women consuming this compound in food, other studies have found nothing.

In a statement that drew criticism from some independent experts, the FSA said that, to reduce the danger, consumers should cook these foods at lower temperatures and eat them when they are cooked to a golden color rather than browned.

Is the golden colored healthier than the normal one or is it the other way around? Do you think that burnt food causes cancer? What spices do you use and what do you eat your toast with? Share your ideas and opinions with us!

2017-10-22
admin
Share
Previous Top 5 Spooky Spirit Healthy Halloween Trickster Treats
Next Self-Help Guru Forcefully Branded Women As An Initiation Ritual
This site is designed for educational purposes only and does not render medical advice or professional services. It is not a substitute for professional care. If you have or suspect you may have a health problem, you should consult your health care provider.
© Copyright 2022, All Rights Reserved