When Shelly Wall went to the medical center for a check up, medical professionals informed her the one news that any currently pregnant woman would not want to hear. She was informed that her baby has a issue that would generally not let him live.

As her doctor went onto explain in depth, Shelly figured out that her baby boy Noah had Spina bifida, and had developed a uncommon problem of the defect triggered by hydrocephalus.

Because of fluid damage from his hydrocephalus, his brain would be crushed down into thin tissues around his skull. As a result, 98% of Noah’s brain would not functioning properly. Basically, even if Noah survived the birth, he would be severely disabled for the rest of his life both mentally and physically.

Noah’s parents were offered a termination five times, and were recommended to make plans for the baby’s funeral even before he was born.

“I’d never seen a baby’s coffin before,” said Shelly in her interview with the Mirror.

But, Noah’s parents did not give up. They chose to give birth to Noah, and hoped to raise him as best as they could until the very last moment.

That was more than four years ago. Flash forward to now, and you will see how Noah’s defying what doctors had told his parents before.

Miraculously, his brain started to grow itself back. When doctors saw Noah’s brain scan, they were at loss for words. This had never happened before – the chances of brain growing itself back is slim to none. But, the evidence was right before their eyes.
The scan suggested a completely different situation than the one taken four years ago – from 2% of functional brain tissues, Noah’s brain had developed almost 80% of brain tissues.

Yes, Noah’s developmental process was admittedly slower than that of his peers, he still learned how to talk. And by the time he was four years old, Noah is speaking just like any other kid in his age group. He’s even capable of tracing the letters of his name and count to ten.

How his brain grew itself is a miracle to everyone – including top scientists and doctors. In fact, BBC announced that it would create a documentary about Noah’s recovery, called “The Boy With No Brain.”

See also: THIS Is How A Kid Who Has Never Eaten A Gram Of Sugar In Her Life Looks Like Today…

Now that Noah’s brain had expanded to 80% of a normal brain, his doctors are making future plans for surgeries that would allow him to walk. 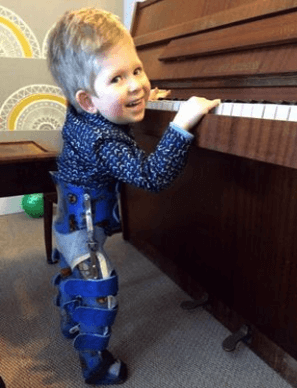 And Noah’s father believes that this will happen. “We’re determined that Noah will be able to walk either with mechanical aids or without,” said his father.

“Noah will show us exactly what he’s capable of and just what he wants to do in his life,” added Noah’s mother. “He’s so determined and we’re so proud.”

What an incredible recovery! It truly is a miracle.

2017-05-25
admin
Share
Previous Couple Successfully Lost Weight
Next Lavender Against Anxiety
This site is designed for educational purposes only and does not render medical advice or professional services. It is not a substitute for professional care. If you have or suspect you may have a health problem, you should consult your health care provider.
© Copyright 2022, All Rights Reserved