Have you ever found yourself in a situation where all of your digital clocks were showing the wrong time? This delay probably happened due to the power running out at some point for a certain amount of time. This is nothing scary, however, if you were away for a day or two, you might want to check if the food in your freezer is still good. You are not sure how long and under what conditions it was exposed and you think there’s no way to find out.

In reference to the Hurricane Matthews that recently swept over parts of the USA, a woman named Sheila Pulanco Russell posted a clever trick on her Facebook wall with all people, including the ones who were forced to evacuate their home. 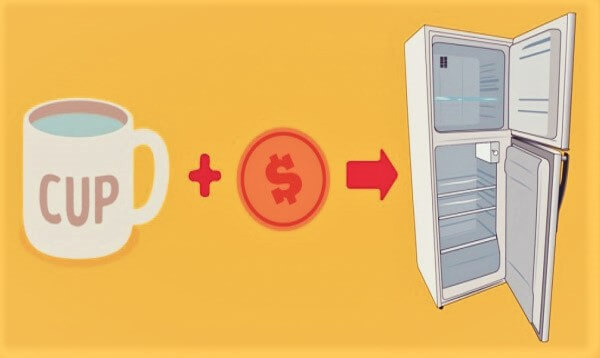 Not only for cases like the one with the hurricane, but this trick is also useful in case of prolonged departure from your home. This trick will make you feel relieved about whether or not the food in your freezer is good to eat or you should throw it out right away.

The trick is actually very simple and it involves combining three simple but efficient tools that everyone has at home: a coin, a mug, and some tap water.

Sheila has explained in her Facebook post how to perform the trick. This post has gotten hundreds of thousands of reactions and shares. Here is what Sheila says:

The people who evacuate from the coast should take a look to this great tip, called the one cup tip. Take a cup of water and place it in the freezer. Once the water is frozen solid, put a quarter on top of it and leave it back in the freezer. This will help you tell if your food has gone totally bad and just refroze or has stayed frozen all the time while yo were gone when you come back home after you had been evacuated.

See also: After You See What Happens , You’ll Freeze Lemons For The Rest Of Your Life!

Look at the coin: if it has fallen to the bottom of the cup, it means that all the food has been defrosted and you should throw it away. But, if the coin is either on the top or in the middle of the cup, then your food is probably ok. This trick is also beneficial regardless of the situation, and you will be able to fall back on it if you lose power for any reason.

In case you are still suspicious about your food, then it would be for the best to throw it out. We all need to put safety first. If you find this tip beneficial, share it with the people you know.

2017-03-03
admin
Share
Previous This Technique Is 3000 Years Old ! It Successfully Cures Rheumatoid Arthritis And Inflammation!
Next Red Spots Appeared All Over Your Body? Should You Be Worried? What Can You Do?
This site is designed for educational purposes only and does not render medical advice or professional services. It is not a substitute for professional care. If you have or suspect you may have a health problem, you should consult your health care provider.
© Copyright 2022, All Rights Reserved